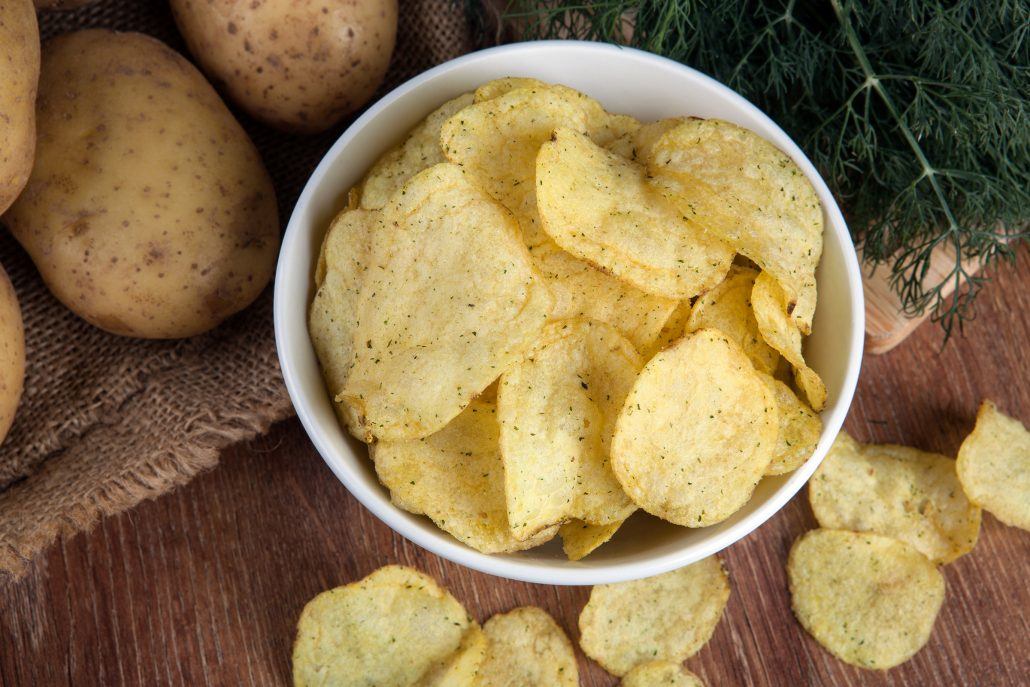 Newsflash! Potato chips still aren’t good for you. That’s probably pretty obvious. And you already know a healthy diet and activity are important for maintaining your weight. But one large, long-term study got very specific about the worst foods for your waistline.

Researchers spent 20 years studying over 120,00 healthy people. Evaluations every four years helped the study pinpoint foods and behaviors that have the biggest impact on weight gain over time.

You probably already have some guesses. But before we start naming names, there were some interesting overall conclusions. They may reinforce what you know and add information to shape your healthy lifestyle.

Let’s start with the one you might guess. Highly refined or processed foods, liquid carbohydrates, and alcohol consumption were found to contribute to weight gain. But fruits, vegetables, nuts, and whole grains showed the opposite effect—limiting weight gain.

That’s kind of a no-brainer, but the next one is less obvious. Mostly because it’s common to hear “eating less and exercise is all you need.” It’s an easy way to describe the change to a healthy lifestyle. But the study adds some nuance.

Their analysis suggests “dietary quality (the types of foods and beverages consumed) influences dietary quantity (total calories).” So it shifts the conversation from “less is more” to “the right amounts of the right foods.” Overall, it means choosing better, healthier options help keep your overall energy balance in check.

Weight Gain Can Sneak Up on You

Weight management is inextricably tied to the laws of thermodynamics. It all comes back to the conservation of energy—total energy in a system remains constant. Basically, you can’t make energy disappear. If you eat calories and don’t use them, they’re stored.

That reality makes weight gain easy over time. While a cheat meal won’t pack on five pounds of fat, constant calorie overruns impact your weight and health. And it doesn’t take much.

The study found that consistently having an extra 50–100 kcal per day is enough to add weight. Those small increases stack up over time. That’s how the average study participant gained 3.35 pounds during each four-year interval.

Findings like this underline the importance of daily dietary diligence. And shows the wisdom of taking the long-term approach of lifestyle change over quick-fix, fad diets.

Top 6 Worst Foods for Your Waistline

Now the part you’ve been waiting for—time to see how close your guesses were. Here are the worst offenders:

How did you do? Hopefully the clues above about starches, refined grains, and processed foods helped you out. Or maybe you were tipped off by other studies that have found similar results about these types of food.

The authors suggest the satiating inability of starches and refined grains may be to blame. Since they don’t make you feel as full, you eat more to fill yourself up. That could account for the constant extra calories that can really add up.

Foods to Stock Up On

The study didn’t just have bad news for carb cravers. It also identified some of the food types that showed positive effects on weight over each four-year period. Here’s what they found:

The results probably reinforce your ideas about what a healthy diet looks like. The authors list some reasons why this group of foods showed benefits for keeping weight gain in check. And it goes beyond simple calories.

The study suggests satiety may to blame again. With higher fiber content and slower digestion speeds, these foods make you feel full. And if you’re eating more whole grains, nuts, fruits, and vegetables, you may not feel the need to fill up on other more processed, higher calorie foods.

Diet is only a piece of a healthy lifestyle. And this study took a look at behaviors and habits that impacted weight gain over time, as well.

Health isn’t as simple as diet and exercise. But physical activity did have a huge, positive impact. Across all groups, physical activity accounted for a four-year average of -1.76 pounds. So, those who got moving fared well in the battle against weight gain.

A sedentary activity—watching television—had the predictably opposite effect. Study participants added 0.31 pounds per hour, per day. Some of this was tied to the snacking that happens during television session. Either way, it gives binge watching a new meaning.

For most of us, sleep is a pretty physically idle experience. But your sleep was tied to positive outcomes. Those whose nightly sleep averaged less than six hours or more than eight hours showed more weight gain.

The study’s advice might sound familiar—eat a fresh, healthy diet, sleep, and get off the couch. But it adds some complexity to the common “just eat less and lose weight” idea.

And whether your guesses about the foods were right, it’s a nice reminder. Checking your progress towards a healthy lifestyle can have an impact. The authors say repeated assessment over time is important. So use the information to make changes and build your health lifestyle.

The 8 Pillars of Holistic Health and Wellness
Scroll to top