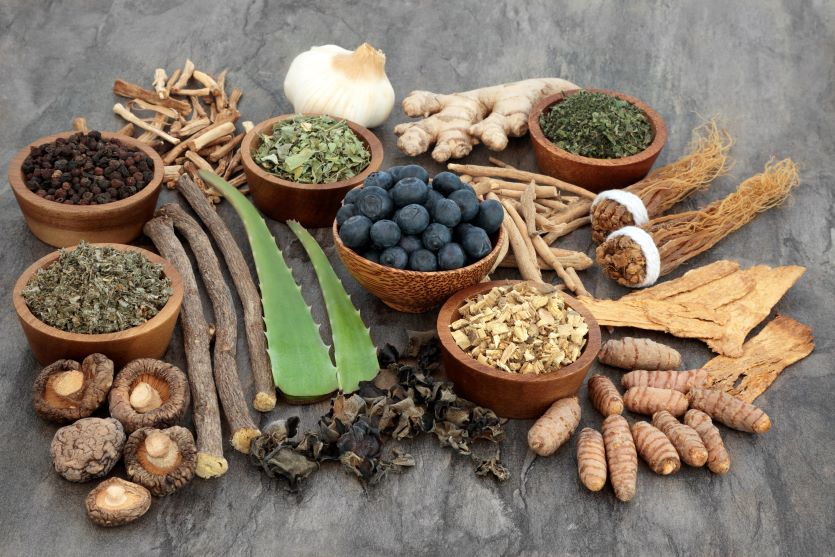 At the most basic level, traditional Chinese nutrition is all about balance. It starts with the importance of finding a daily balance of flavors (sour, sweet, bitter, spicy, and salty) and thermal properties (cold vs hot). The philosophy extends even to the choice of each ingredient, which plays an important role in this balance, as well. Herbs, for example, are not viewed as a simple seasoning or addon, but as a way of balancing an entire meal.

The balancing act of traditional Chinese nutrition has been going strong for centuries. Long before modern medicine and clinical trials, knowledge about healthcare was formed over generations by individuals testing what was available to them. When a food or ingredient proved beneficial, that knowledge was passed onto the next generation.

This combination of balance and a long history of health benefits explain why tea, ginseng, mushrooms, ginger, and more play such a large role in traditional Chinese nutrition. Modern research and knowledge about the chemical compounds in these foods expands on these benefits and further exposes the underlying reasons why they are seen as beneficial.

All teas (white, green, black, oolong, and others) are ultimately derived from the same plant, Camellia sinensis. So whatever you are steeping or sipping is differentiated by the way the plant is grown and the method of leaf preparation. Green and white tea, unlike black and oolong tea, are not fermented, so many of the plant’s active constituents remain intact.

Tea plays an interesting role in balance for traditional Chinese nutrition, because it can fit on both sides of the thermal spectrum. Green tea is thermally considered cold and would be the choice for the warmer spring and summer seasons. Black tea, meanwhile, is warm and considered perfect for cold climates. In some Chinese populations, consumption of tea amounts to several cups per day.

Whether hot or cold, tea has long been used as a stimulant in Chinese culture. Now through modern analytical techniques, the caffeine content of tea can be measured. That allows you to better understand how many cups you’d like to drink—or at what time you should partake. As a general rule of thumb, your typical cup of green tea 30-70 milligrams (mg) of caffeine. Black teas, on the other hand, range from 45 mg to 90 mg.

Caffeine isn’t the only compound in tea researchers have quantified. Many phytonutrients have also been discovered. In fact, green tea is a rich source of catechins, a class of bioflavonoid compounds with strong antioxidant potential. The green tea catechins with the highest antioxidant activity are epigallocatechin-3-gallate, epicatechin-3-gallate, epigallocatechin and epicatechin.

It’s fairly easy to incorporate the caffeine and catechins of tea into your life. You may already be drinking it—many people around the world do. But if you’re a coffee person, replace a cup with green or black tea. For those sensitive to caffeine, go with a decaffeinated black tea. Herbal teas don’t actual contain the leaves of the Camellia sinensis plant, so—while they’re a delicious and healthy drink—they don’t provide the benefits seen from traditional Chinese nutrition’s most beloved beverage.

Ginseng was used in China and throughout much of eastern Asia as a warming herb that also helped invigorate Qi—or life force. Qi can be measured in several different ways, but is generally thought of as the total vital energy within a person.

Ginseng’s reputed role in Qi is backed up by modern clinical studies on this herb. And those are mainly tied to compounds in ginseng called ginsenosides.

You can experience the support of ginseng’s ginsenosides in many ways. Traditional Chinese nutrition uses ginseng steeped in water to create a kind of tea. You can also use ginseng as an addition to a variety of tasty soups.

Mushrooms have been used in traditional Chinese cooking for hundreds of years as a way of optimizing Qi and supporting the immune system. Even in the modern Chinese diet, mushrooms highlight Chinese dishes that are eaten every single day. You can also find mushroom in teas and supplements.

Their widespread use is about more than the fungi’s ability to soak up flavors and provide umami. Mushrooms support your health by adding essential vitamins and minerals to your diet. Recent research goes further and shows mushrooms also contain beneficial compounds that aren’t found in many other foods. One of these is a polysaccharide (complex sugar) called beta-glucan.

Mushrooms might already be a staple of stir-fry dishes and many other meals with a Chinese flare. So eating more mushrooms might just be a matter of more committed meal planning. Select the versatile shiitake for inclusion in soups, breakfast scrambles, and a variety of different pasta dishes.

Due to its spicy taste, ginger is considered a warming food in traditional Chinese nutrition. Ginger’s kick of heat comes from a single phytochemical called gingerol. Modern research has revealed gingerol’s antioxidant and antimicrobial properties.

In addition to being a warming food, ginger also has a long history of use for supporting digestion and maintaining digestive comfort. Today, ginger is used as a seasoning in many popular foods, and it’s found in many herbal teas where it continues to be used for digestive support.

You can add ginger to a variety of stir-fry dishes, soups, stews, curries, or other Asian dishes. Stock up on the ground spice or full root to have everything you need to spice up your diet and support your health with this staple of traditional Chinese nutrition.

The above foods aren’t an all-inclusive list of ingredients that are important in traditional Chinese nutrition. Garlic, congee, goji berries, rhodiola, walnuts, and many other foods may play roles in helping support your individual health needs.

Some ingredients might already be favorites of your family’s dinner table. But more experimentation with these foods can yield a variety of delicious, healthy meals. By using them as a part of your daily diet, you can take advantage of traditional Chinese nutrition and mix the ingredients in a way that can also help support your overall macronutrient, vitamin, and mineral requirements, too.

Spicing up your weekly meal plan with elements of traditional Chinese nutrition is a wonderful way to vary your diet, explore new cuisines, and help your health along the way.

How To Create a Healthy Living Environment