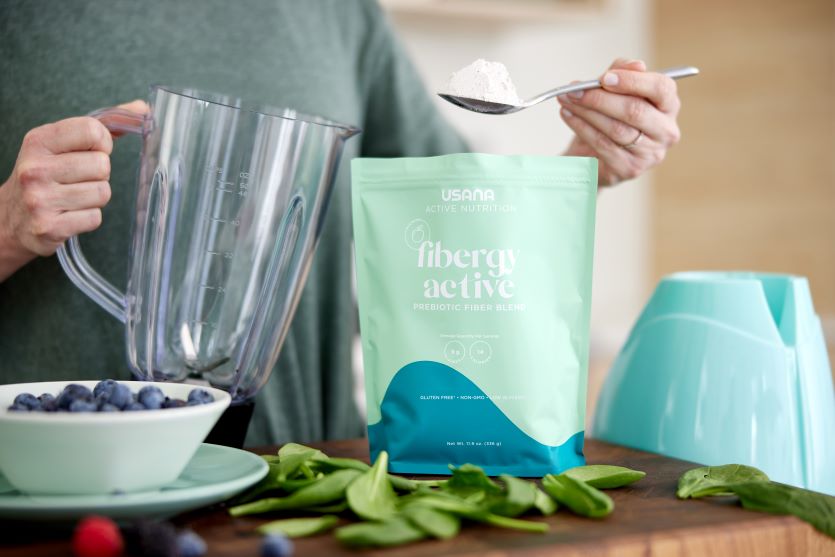 Peak physical health isn’t possible without a good digestive system. And good digestive well-being begins with a healthy gut. It requires a diverse combination of bacteria, that includes plenty of beneficial species.

Eating enough dietary fiber is one way to sustain digestive health and support your microbial community. The two main types are insoluble and soluble fiber.

Soluble fibers mix well with water and take on a gel-like consistency that smoothly moves through your gut. Soluble fiber helps slow digestion and supports detoxification by helping your body remove impurities. Foods rich in soluble fiber also may aid in maintenance of normal blood lipid and glucose levels already in a normal range.

Insoluble fiber adds weight and bulk to food. It helps the food move through the digestive tract more efficiently, so you can digest comfortably and with regularity.

Unfortunately, 9 out of 10 adults fall short of the recommended 25-35 grams of fiber daily.

The average adult only eats about 16 grams of dietary fiber a day. Well short of the recommended 25 to 35 grams per day. It’s hard for your digestive system to operate at full strength with only half the fiber it needs every day.

The basic characteristics of fiber go a long way in explaining its documented health benefits. But recent research has shown that fiber’s actions are not limited to classic functions of soluble and insoluble fiber.

Certain types of fiber also have a beneficial effect on your microbiome. They can support the growth and maintenance of beneficial microbes like bifidobacteria. These bacteria provide health benefits beyond supporting digestion.

In a recent clinical study, USANA scientists aimed to determine if a prebiotic fiber food (Fibergy Active) would have a measurable impact on gut microbial health. The study measured the impact of the fiber product on the subject’s microbial community, it’s effect on metabolic health, and general markers of health.

The study was conducted at Ragle Human Nutrition Center, University of California, Davis. It included 20 healthy adult men and women aged 18-45 years. Subjects had typical fiber intakes of less than 15 grams/day and were of average weight (BMI ranged from 23-32 kg/m2).

The study excluded anyone with chronic intestinal diseases such as Crohn’s, IBS, celiac, ulcerative colitis, or any other inflammatory bowel disease. Also excluded were those using any antibiotic or other prebiotic or probiotic products within the previous six months. Exclusion criteria also included pregnancy, smoking, excessive alcohol consumption, anemia, recent illness, recent surgery, significant recent changes in body weight, and the use of several relevant over the counter and pharmaceutical medications.

The study was a randomized, double-blind, placebo-controlled, cross-over design. The study participants were given either the prebiotic fiber food (USANA Fibergy Active) or a matching placebo to take for four weeks. This was followed by a four-week washout period during which they maintained their normal diet and lifestyle. Then each participant was given the opposite treatment for the final four weeks.

Every two weeks, study visits were performed to collect data about the participants. Health questionnaires and measurements such as blood pressure were collected during the intervention to track the subject’s general health status.

Whole blood samples were collected after a 12-hour overnight fast at the beginning and end of each intervention arm. A lipid panel consisting of total cholesterol, HDL-cholesterol, LDL-cholesterol, and triglycerides were measured or calculated. Other measurements of metabolites were also analyzed from plasma.

Stool samples were taken by participants and metagenomic (DNA) sequencing was performed for analysis. Short-chain fatty acids (SCFA) were extracted and analyzed from the fecal samples.

There were no observed changes in health profiles and measurements between prebiotic and placebo groups, nor were there any significant changes in nutrient intakes throughout the study.

After calculating microbial diversity—Fibergy Active was found to support one type of bacteria, Actinobacteria. Within the group of bacteria that make up Actinobacteria, there are many species of bifidobacteria. 11 groups (genera) significantly changed with the consumption of the fiber product. The genera Bifidobacterium, Anaerostipes, and Hungatella increased while eight other genera decreased.

The gut microbial genome (DNA of the gut bacteria) was also analyzed. Out of 2,718 genes in the analysis, 163 genes changed with the prebiotic treatment. Fibergy Active supported genes involved in starch and sugar metabolism. Specifically, a gene associated with fructose metabolism.

Metabolites were also measured. A metabolite is an intermediate or end product of cellular metabolism. These small molecules have various functions including energy conversion, structure, cell signaling, effects on enzymes, and co-factor activity.

Indoleproprionate (IPA) is one of the metabolites that was significantly increased. Evidence on the health effects of IPA is continually growing. Current research indicates that IPA plays an important role in supporting mucosal integrity and barrier function.

Consuming the prebiotic food for 4 weeks led to various changes in specific bifidobacterial species as hypothesized. The results of this study confirm the benefit of a diverse, prebiotic dietary fiber blend in adults who do not typically consume the recommended amount of dietary fiber. Even small, easy to incorporate changes in dietary intake can support the gut environment and microbial metabolism.

Primary active components of the Fibergy Active formula used in the study:

Fructooligosaccharides (FOS) are the first ingredient in USANA Fibergy Active. FOS are soluble fiber in linear chains of fructose molecules. FOS occur naturally in many plants and foods such as asparagus, onions, garlic, and artichokes among others. They are a source of natural sweetness. They are a low-glycemic soluble fiber, which helps maintain healthy blood-sugar already within the normal range. Their primary function is to act as a prebiotic, or fuel and nourishment for the gut microbial community.

Inulin, not to be confused with insulin, is another very effective soluble prebiotic fiber that has important functions in Fibergy Active. Inulin in the diet helps promote and maintain biodiversity in your gut. Inulin feeds the bacteria in the gut through a process known as fermentation. During fermentation of inulin, gut bacteria secrete enzymes that further digest the fiber into short-chain fatty acids (SCFA). These SCFA support the growth of health supporting bacteria like bifidobacterial and lactobacilli in the intestines.

Sugarcane fiber is insoluble fiber included in Fibergy Active. It‘s a component of many fiber products because it supports regularity, which allows you to digest comfortably.

Apple, blueberry, and raspberry fruit powders contain phytochemicals and antioxidants that synergize with fiber to optimize your digestion.