Build Your Knowledge About Protein and Amino Acids 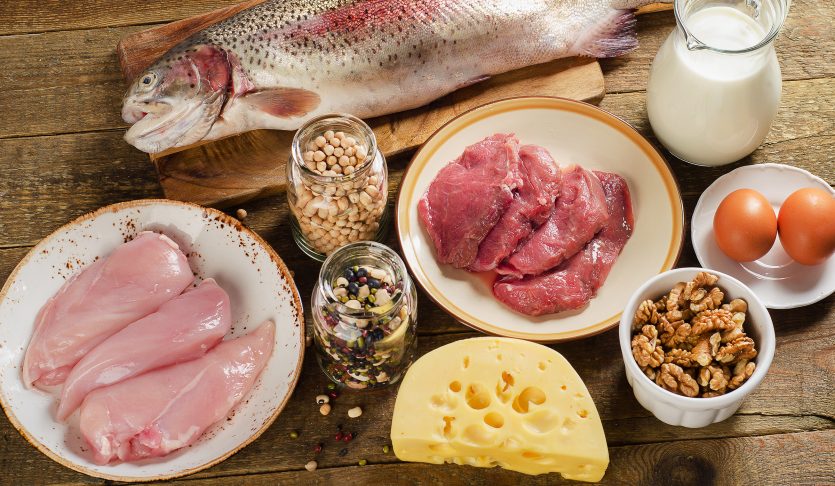 All biological organisms—including you—are essentially protein structures filled with water, and sometimes supported by bones. That’s how crucial it is. Protein is your body’s most important building block. In fact, the word protein is derived from the Greek proteios “the first quality,” or from protos “first.”

It’s estimated the human body contains over two million proteins. The total number found in biological organisms on land is likely to exceed 10 million. But nobody knows for sure. The number is huge, because every protein has another one that can break it down.

Proteins are long-chained molecules made from the basic building blocks of life—amino acids. They’re organic compounds that have a very specific chemical structure. Amino acids containing amine (molecules with a nitrogen and two hydrogen atoms) and carboxyl (molecules containing carbon, two oxygen, and one hydrogen molecule) functional groups. These are connected to a side chain (R group) of molecules specific to each amino acid. 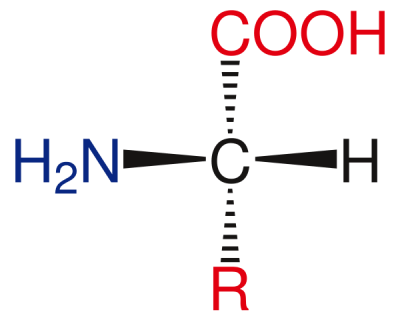 There are 20 well-known amino acids that make up the proteins in your body. Recently, two additional amino acids have been discovered. So, all animal and plant proteins on earth are constructed from these 22 amino acids.

In 1806, French chemists Louis-Nicolas Vauquelin and Pierre Jean Robiquet isolated a compound in asparagus that was subsequently named asparagine. It was the first amino acid discovered.

The longest known protein, titin, is also known as connectin. It contains 26,926 amino acids. Titin is found in muscle and contributes to its passive stiffness.

Even with a somewhat limited amount of amino acids, proteins can be very complex molecules. That’s because most proteins fold into unique, three-dimensional structures.

You might think of proteins as building blocks—especially for muscle tissue. But proteins serve many vital functions in the body. And some that might surprise you. The major ones are listed below.

The best-known role of proteins in the cell is as enzymes, which catalyze chemical reactions. This can help you metabolize your food into cellular energy. Digestive enzymes are a good example of this type of protein. These enzymes also can take the form of antioxidants. Selenium-containing protein glutathione peroxidase is one of the most important antioxidant compounds in your body.

In 1955, insulin became the first protein to be fully sequenced. British biochemist Frederick Sanger received the Nobel Prize in Chemistry for this groundbreaking research.

Recombinant DNA techniques are used in 1978 by biotechnology firm Genentech to produce synthetic “human” insulin, making insulin the first human protein to be manufactured through biotechnology.

Many proteins are involved in the process of cell signaling and signal transduction. Some proteins, such as insulin, transmit a signal from the cell in which they were synthesized to other cells in distant tissues.

Proteins participate in both sides of the signaling process. They also act as receptors on the cells that bind to a signaling molecule to induce a biochemical response.

Antibodies are protein components of the immune system. Their primary function is to bind foreign substances in the body (antigens) and target them for destruction.

These provide shape and rigidity to biological components. Most structural proteins are fibrous in nature.

Collagen and elastin are two great examples of these tough, fibrous proteins. They’re both critical components of connective tissue, like cartilage. And they serve major functions in the structure of skin. The protein keratin provides structure for your hair and nails. In the animal kingdom, keratin helps make feathers, hooves, and some animal shells.

A final category includes structural proteins that are globular. They form long, stiff fibers that allow cells to maintain their shape and size.

Proteins also play roles in cell adhesion, growth factors, nutrient transport and storage, and much more. In humans, non-protein amino acids also have important roles as neurotransmitters or precursors to other molecules. Neurotransmitters are substances that help transfer impulses between nerves.

Protein and Amino Acids in the Diet

Proteins you eat are not absorbed intact. So, you don’t eat a chicken breast and add that exact same type of protein to your body. Proteins are digested into amino acids or small peptides that can be absorbed by the intestine and transported in the blood.

Peptides are distinguished from proteins because they’re smaller—typically containing 50 or fewer amino acids. The shortest peptides are dipeptides, consisting of two amino acids joined by a single peptide bond. A polypeptide is a long, continuous, and unbranched peptide chain.

Protein digestion begins in the stomach. The acidic environment and the stomach enzyme pepsin begin to denature (unravel) the protein. This makes it more accessible to digestive enzymes secreted by the pancreas.

Other specific enzymes further digest the larger peptides into di- and tripeptides and free amino acids. These are then released into the blood for use by other tissues. After digestion, the amino acids are used to synthesize proteins and other biomolecules or they’re converted to urea and carbon dioxide as a source of energy.

Of the 20 standard amino acids, nine are called essential because your body cannot make them from other compounds at the level you needed for normal growth. So, they must be obtained from food. The essential amino acids include histidine, isoleucine, leucine, lysine, methionine, phenylalanine, threonine, tryptophan, and valine.

Not all dietary proteins are equally effective for your health. Scientists have developed a scale to let you know a protein’s quality. Previous methods of measuring quality include the PER (protein efficiency ratio) and BV (biological value). But they’re rarely used today.

Now the preferred method of determining protein quality is known as protein digestibility-corrected amino acid score (PDCAAS). The PDCAAS allows evaluation of food protein quality based on your needs. It measures the quality of a protein based on the amino acid requirements (adjusted for digestibility) of a 2- to 5-year-old child (considered the most nutritionally demanding age group).

Using the PDCAAS method, the protein quality rankings are determined by comparing the amino acid profile of the specific food protein against a standard amino acid profile. The highest possible score is a 1.0. This score means, after digestion of the protein, it provides 100 percent or more of the essential amino acids required—per unit of protein.

Daily protein needs are combinations of many factors, including age, body composition, gender, total energy intake (calories), training status, and level of exercise for an athlete.

The recommended dietary allowance (RDA) for adult females is 46 grams/day, for adult men it is 56 grams/day, and for pregnant and lactating women it is 71 grams/day. That doesn’t match up with the recommendations for a reason.

Much like the RDAs for micronutrients, they’re meant to provide sufficient levels to allow for normal health and growth in apparently healthy individuals. The RDA is the minimum level of intake needed to meet basic nutritional requirements, but it isn’t necessarily the specific amount that is best or optimal.

Athletes consume dietary protein to repair and rebuild skeletal muscle and connective tissues following intense training bouts or athletic events. Athletes should generally get at least 1.4 to 2.0 grams of protein for every kilogram of body weight per day.

One specific type of amino acids is especially important for athletes— branched-chain amino acids (BCAAs). Of the nine essential amino acids, only three are known as BCAAs. But they make up about 35 percent of the proteins in muscle tissue. These BCAAs are also known to play a beneficial role during aerobic exercise by decreasing the rate of protein degradation and delaying muscle glycogen depletion.

The three BCAAs are leucine, isoleucine, and valine. BCAAs are crucial to protein synthesis and turnover, cell signaling pathways, and glucose metabolism. They also play roles in the synthesis of proteins and neurotransmitters in the brain, and the production of energy.

A growing amount of scientific literature suggests that of the three BCAAs, leucine appears to play the most significant role in stimulating protein synthesis.

Protein for the Elderly

Aging tends to lead to muscle loss. Normal aging is associated with changes in muscle protein metabolism and decreased response to amino acids in a meal. Adequate leucine (BCAA) intake during a meal may help overcome this insensitivity to muscle proteins and be a useful tool in the prevention of excess muscle loss. The minimum dosage for these benefits is likely between 2.0 and 2.5 grams of leucine per serving or meal.

It is also becoming clear that leucine, taken as part of a whole quality protein, is likely more beneficial than supplementing with BCAAs alone. To maximize muscle protein retention in the elderly and provide adequate leucine, most experts propose dietary plans that include 25-30 grams of high-quality protein per meal.

Muscle loss occurs with age but losing more than normal (0.5-1.0%/year) is known as sarcopenia. It’s a progressive decline in skeletal muscle mass which leads to decreased strength and functionality. Sarcopenia occurs in as much as 30% of individuals over 60 years of age and more than 50% of those over 80 years. 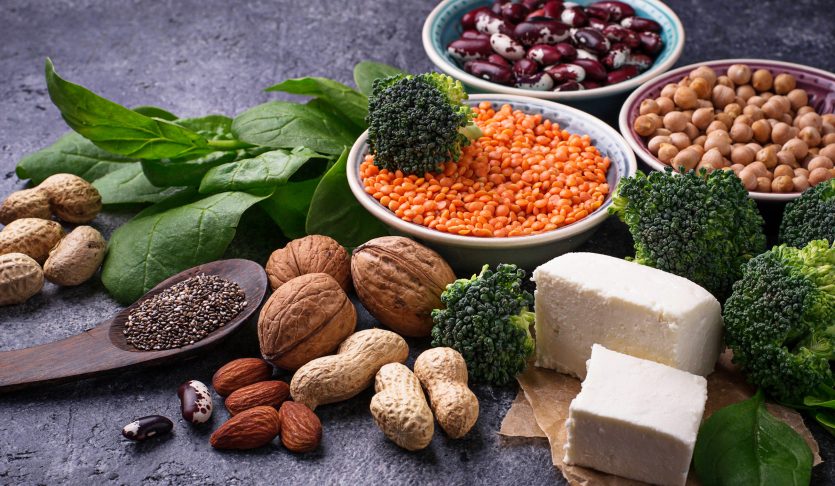 However, many plant proteins provide less than optimal levels of all essential amino acids. For vegans or vegetarians, it simply becomes more important to get a wide variety of foods that include beans, legumes, nuts, and seeds. Typically, a vegetarian diet that is highly varied and adequate in calories will provide plenty of quality protein.

Based on the totality of the available research, a safe and healthy range of protein to aim for is roughly 15-25 percent of total dietary calories—with some adjustments for activity level and age. For an average 2,000 calorie intake, this would represent an intake of 75-125 grams of protein per day.

There is no single best protein source. While there are certainly some foods that would be considered better protein sources, a varied and mixed diet typically provides adequate protein intake. And, focusing on quality whole foods will help you achieve an adequate intake of important nutrients and proteins, too.

The best sources of protein, based on protein content and other nutrients, are: Seafood, lean poultry, beans, eggs, dairy (yogurt, milk, and cheese), soy and other legumes, lean beef, and pork. Quinoa, pumpkin seeds, and pistachios are also excellent sources of protein.

What if you’re having a hard time meeting your protein needs, or don’t have the time for a sit-down meal? A quality meal-replacement drink or bar can be a beneficial addition to your protein intake for the day.

Understanding the Facts About Dietary Fat

Know Your Nutrients
Scroll to top