Glutathione – The Amazing Detoxification Molecule You Might Not Know 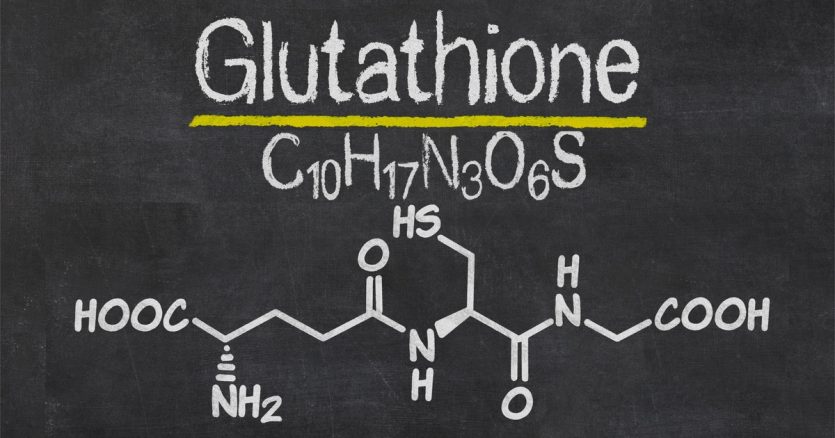 You can probably name the most plentiful molecule in your body. (Hint: It’s water.) And you know how important it is to your health. But right behind H2O on your body’s molecule count is glutathione (pronounced gloot-a-thigh-own).

With glutathione, second place definitely isn’t the first loser. This tripeptide—a small protein composed of three amino acids—might be the most underrated and underappreciated molecule in the body.

There are a lot of reasons why glutathione is important to your health. You’ve already read about the first one. The ubiquity of this protein shows you its importance. It’s found in every cell in your body. And for some good reasons you’ll read about below.

The Forms of Glutathione and Their Functions

The simplest definition of glutathione is: a small protein made up of three amino acids—glycine, cysteine, and glutamate. But it comes in a few different forms and works with an enzyme that has a very similar name. To avoid any confusion, let’s clear up some vocabulary before we go further. 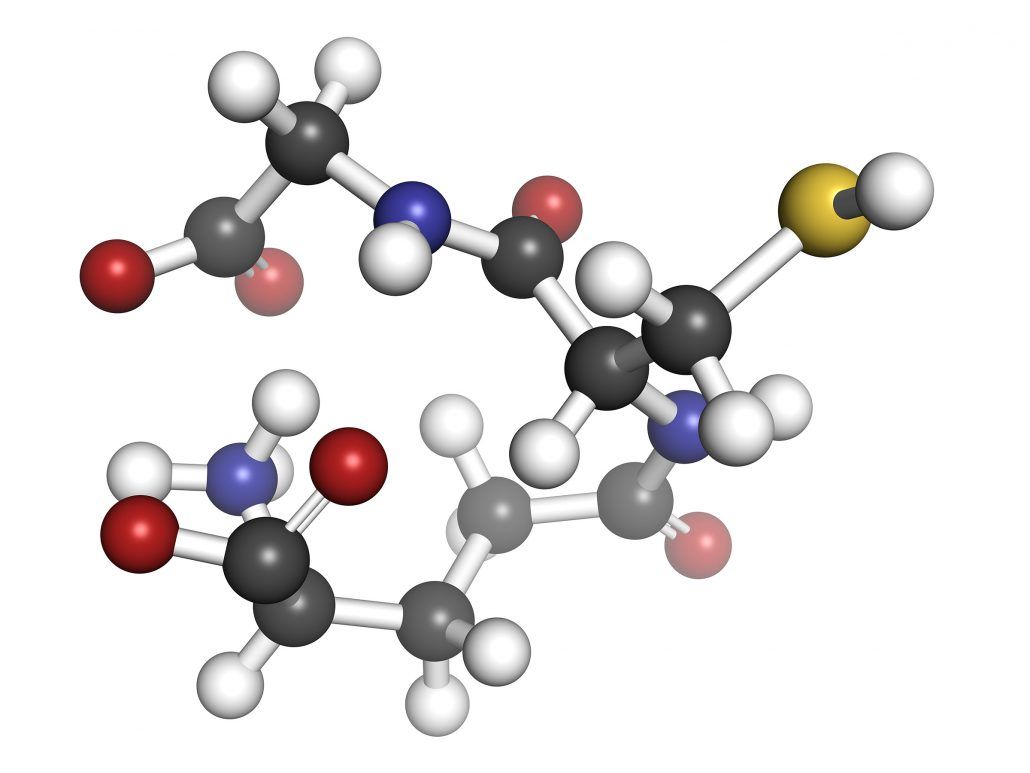 GSH – The Reduced Form of Glutathione

This is what most people mean when they say glutathione. The two terms—GSH and glutathione—tend to be used interchangeably.

GSH is the reduced form because it’s an electron donor. Without getting too deep into reduction-oxidation (redox) chemistry, a substance that can give away an electron and reduce its total number of electrons is called reducing.

You can also think of GSH as the active, working form of the molecule. It’s working in your cells, neutralizing free radicals and other oxidants, and keeping your cells in a reduced status. Literally every biochemical reaction in our cells requires us to be in this reduced state. So when we stop being in a reduced state, we stop living.

GSSG and GR – The Regeneration of Glutathione

Oxidized is the opposite of reduced. Molecules that are oxidized want an electron.

After GSH donates its electron, it becomes oxidized and leads to the formation of glutathione disulfide (GSSG). This oxidized form is created when two GSH join after they’ve both given away electrons. This is achieved by the bonding of the sulfur atoms of each oxidized GSH molecule.

With the help of the enzyme glutathione reductase (GR), those GSH molecules can get back to work. This enzyme catalyzes a reaction that results in the regeneration of two reduced glutathione molecules.

GS-X – A Game of Molecular Tag

You won’t read a lot about the last form of glutathione in this article, but GS-X is pretty simple to understand. When a glutathione molecule sticks to a protein, toxin, or other compound, it’s called GS-X.

Hopefully that clears up some of the confusion—without creating more. For the rest of the article, glutathione and GSH are used interchangeably. The other forms will be called out by name or acronym when they’re used.

Glutathione as an Antioxidant

An antioxidant is broadly defined as anything that neutralizes oxidants—often used interchangeably with free radicals. The details of antioxidant activity are complex. But it comes down to the availability and need for an electron. Electrons want to exist in pairs. The strong the desire for a molecule to have its electrons in pairs determines how strong of an oxidant or antioxidant it is.

Antioxidants do their work by donating electrons to reactive, oxidized material. This stabilizes the oxidant and lowers the cell’s oxidative status. Glutathione is the most numerous and prominent water-soluble antioxidant. It’s a powerful endogenous antioxidant—one made inside your body.

The protein’s structure is very good at neutralizing oxidative substances in the body. Placing the sulfur atom in cysteine with the two other amino acids—glycine and glutamate—is the key. This allows glutathione to very easily accept and give away electrons. You can think of it as the perfect molecule structure for the job it does.

There’s even a process—described above—that regenerates glutathione molecules so they can keep scavenging free radicals. This is called “redox cycling” and is often why endogenous antioxidants and enzymes are more powerful than dietary antioxidants.

Efficiency in the glutathione regeneration process is crucial to keeping cells in a healthy, reduced state. The GSH-GSSG ratio is an important indicator of the efficiency of our metabolism and the amount of cellular oxidative stress.

Glutathione is present in every cell of the body. But concentrations are seven to 10 times higher in liver cells than anywhere else. That’s because the tripeptide plays an important role in Phase II detoxification processes in the liver.

Phase II detoxification is the process of metabolizing various molecules that need to be removed from the cell and body. The most common example is the body joining glutathione to these molecules.

With the help of another family of enzymes (glutathione-S-transferases), glutathione has the ability to plant itself on toxins, flagging them as hazardous. This helps remove chemical substances that weren’t made in your body. The scientific name is xenobiotics. And it can describe drugs, environmental pollutants, or any number of substances.

It’s important that glutathione attaches to these toxins before they can bind to important cellular components, like nucleic acids. Glutathione-S-transferases kick-starts this reaction and GSH finishes the job. Reduced glutathione neutralizes the positively charged intruders by donating electrons. If you haven’t noticed, glutathione is very good at doing that. In this case—like the others mentioned—this protects you from adverse consequences.

But the detoxification process isn’t complete. The next step is to turn the formerly hazardous material into a form that can be further metabolized and/or expelled.

Glutathione aids in transforming toxins into mercapturic acid, which can be flushed from the body in urine. If this is all a little complex, just remember this: glutathione plays a role in making toxins water soluble so you can get them out of your body.

And don’t underappreciate the importance of this process. This specific removal pathway involving glutathione plays physiologically important roles in detoxification. Without it, you’d likely drown in a sea of toxins.

The Production of Glutathione

Since glutathione is a protein, it’s very hard to absorb efficiently from your diet. Like other proteins, the digestive system breaks glutathione into its basic components—glycine, cysteine, and glutamate. There is also no way to absorb it directly intact.

How do we get it then? Using “endogenous antioxidant” above may have already given away the answer.

Your body makes it. GSH is made exclusively in the cytoplasm of cells—the water-soluble compartment of the cell. Then it’s transported to other locations in the cell and even throughout the body.

Its production can be triggered in two ways. Let’s deal with the simpler one first—the presence of cysteine. An increase of this amino acid has been shown to increase glutathione levels. Cysteine is found in the lowest concentrations of the trio required to make GSH. Basically, when it shows up, production can finally start. This is why supplementing with cysteine—or its precursors—can be beneficial.

The second is a little bit more complex. It involves turning on genes that produce the two enzymes responsible for making GSH.

These glutathione-synthesizing genes are part of the Phase II detoxification machinery in your body. Your production of glutathione is low when conditions are normal. You don’t need it, so your body doesn’t make it. But when the right cellular receptors sense toxins, they signal your genes to flip the switch and start the process to make GSH. Research has shown these genes can be turned on via cell-signaling pathways—the major one being Nrf2.

Other non-toxin molecules can trip the sensors and start up your cellular machinery, too. This also includes many nutrients from plants. Broccoli extract, milk thistle, and alpha-lipoic acid are three nutrients shown to stimulate GSH production. These safer nutrient stressors likely trigger similar cell-signaling pathways to boost glutathione levels and enhance cellular protection.

As you age, your body doesn’t make as much GSH and the levels of the protein in your tissues drop. This makes it harder for your cells to deal with oxidants and toxins. So what do you do to maintain healthy levels of this important antioxidant?

The answer lies in the research mentioned above. The ability of alpha-lipoic acid and other nutrients to trigger production and increase levels of GSH. Also providing your body with enough cysteine is key so the amino acid’s absence doesn’t slow production. These two—especially done in tandem—are what research indicates are the most viable solutions for maintaining healthy GSH levels. And that’s very important. Remember, those levels help your cells stay in a reduced, healthy state.

How Grape-Seed Extract Supports Your Health
Scroll to top